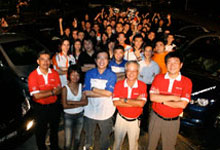 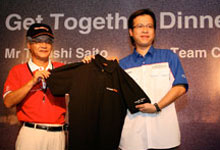 Honda Malaysia took the opportunity to organize a gathering for 100 Honda City owners at a café in Sri Hartamas together with Mr. Takashi Saito, the man who led the team that revolutionized Honda City into the sporty, smart, practical and fuel-efficient sedan that it is today.

Speaking to excited and eager Honda City owners, Mr. Saito said, "I am pleased to be here tonight, to personally meet the owners and everyday users of the Honda City in Malaysia. The car was designed and created for you and your feedback is most valuable to us. We at Honda, irrespective of the country we operate from, are constantly looking for ways to improve on our products through communication and obtaining feedback from our customers. Gatherings such as this are a perfect example."

Sharing about the concept and secret behind the popular Honda City, Mr. Saito said, "When we started the project, we wanted to make the City a quality car at an affordable price. This means we had to create an outstanding vehicle at a lower cost; and bring to customers, a car that they can be proud to own."

"It was challenging but by applying Honda's fundamentals in automotive engineering, the MM concept, we were able to produce the City which gives performance without compromising on fuel efficiency and interior spaciousness."

Mr Saito added, "We take customers' feedback very seriously. For example, after the City was first introduced, customers wanted the design of the car to be sporty also. So we made the Honda City IZ in 1999, which has a sporty image. And hence, the second generation Honda City was built on the concept of Advanced and Sporty."

"Malaysian customers give us a lot of good input. The water repellent fabric seats that are available in the enhanced City was a direct result from the feedback received from our customers here. In fact, this feature is a "first" for a car in Asia."

Welcoming Mr. Saito and Honda customers to the gathering, Honda Malaysia Sdn. Bhd. Managing Director and Chief Executive Officer, Mr. Atsushi Fujimoto said, "We are pleased to be able to provide our customers the opportunity to hear a first-hand account of the planning, thought-process and technology that went into the very cars that they are driving everyday."

Mr. Fujimoto added that Honda Malaysia has just recently launched an enhanced edition of the Honda City, boasting class-leading performance and comfort coupled with a host of practical features. The enhancements made to this Honda City are based on surveys and feedbacks from Honda customers in Malaysia.

Some of the more popular features of the Honda City amongst customers are the Ultra Seat, large boot space, interior spaciousness and the VTEC engine.

The Honda City owners gathered at the event, who are also members of the Team City showcased their passion towards their Honda City in a video presentation to Mr. Saito and the Honda management. The video captures the drivability of the Honda City through various activities organized by the club such as convoys, monthly 'teh tarik' sessions and outstation trips.

Speaking at the ceremony, Mr Samz Lum, President of Team City said, "We are proud to own City and this is not just a car to us. It is an extension of our personality and style. Not many car owners have the privilege of meeting the person behind the design of the car. Honda Malaysia gave us such a rare opportunity and we are very appreciative." 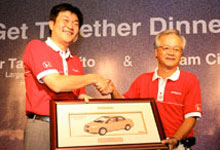 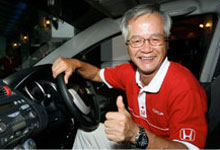