Getting up close with the Honda NSX Teams

Last Saturday, 20 June 2009 saw fans of motorsports filling the Sepang International Circuit in abundance even though it was just for the Super GT qualifying race. The rainy weather made it a perfect morning for sleep in on a weekend, but the roar of engines, smell of petroleum and not forgetting the sights of the beautiful GT Queens - got a number of fans out of their beds and heading for the only Super GT race to be held outside of Japan.

The weather soon cleared up as Honda Malaysia gathered the media for a special Pit Tour conducted by Mr. Hiromasa Tanaka, Chief Engineer of the Honda R&D Department in Japan. Mr Tanaka's years of experience and expertise in motorsports was clear as he answered all the questions and shared with us a great amount of knowledge on the Honda NSX teams.

Below are the excerpts of the interview:

Mr. Tanaka: Selamat tengahari! Hello and welcome to Media Pit Tour. First, I'll be giving you a short briefing on Super GT, the race machine itself and Honda's race activities. Firstly, as you know the Super GT is a production-base modified racing category. Car modification isn't restricted. We made many modifications to the car to improve the performance. The exterior looks very similar to production car but most of the interior is redesigned for racing. The suspension is for racing and has a very short stroke. The braking is for high performance; the brake disc is like a pizza pie measuring nearly 40cm in diameter. The engine position is also different. The production NSX car has transverse engine and the gearbox is at the side of the engine. In GT racecar, the engine is mounted longitudinally and to improve the weight distribution, we put the gearbox in front of the engine making it in the center of the car. 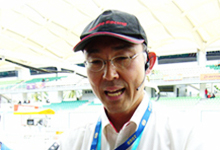 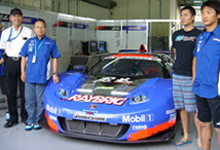 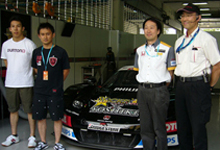 Q: What is the weight distribution between the front and the back?

Mr. Tanaka: That is top secret for us! The main construction of the car is completely redesigned using steel tubes and carbon fibre. The car's torsional rigidity is 10 times higher compared to a production car. Body rigidity is very important for a racing car. With the "big power and hard braking", the driver must be able to control the car. For delicate control, the body rigidity is very important. The braking power is 3 times stronger than that of a production car. It produces a lot of heat. So we have to improve the cooling. 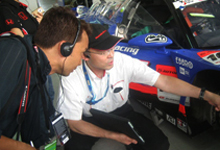 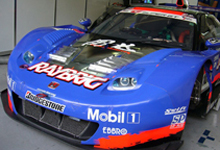 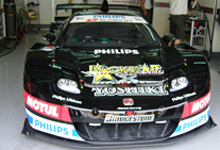 Q: In Sepang, what is the biggest problem?

Mr. Tanaka: The heat is a very serious problem. The temperature is very high; the engine cooling is very severe here. For example, we adjust this vent here by 20mm high just for Sepang. When we go back to Japan, this will not be used because it produces drag. It blocks the airflow as it sucks in the radiator cooling air.

Q: What do you do for the driver? It must be very hot as well.

Mr. Tanaka: The temperature can get to about 60 degrees Celcius and inside of the drivers' suit; it can get to 40 degrees. The humidity is very high; almost 100 percent. It is a very severe condition. So we use a driver-cooling system by water through hose, with ice cubes and dry ice; we circulate cool water into drivers' innerwear. If this stops, drivers will dehydrate and sometimes lose sense, which can cause serious accidents or loss of overall time.

Q: What is the fastest pit stop you have done in Sepang?

Q: Besides the regulation, is there any new development or project in progress for the NSX?

Mr. Tanaka: We cannot comment on the details of the next project, but we are studying for future races. In GT racing, the car is important but at the same time, the drivers' ability, the combination of two drivers, pit work and the pit work strategy, and how much fuel to be put in, and the pitch higher should be changed or not...is a very difficult decision. It has a big influence on the result of the race. Our 5 teams have good experience in racing and they each have good strategies for the race.

After the Q&A session, it was time for a photo session with the car and also Mr. Tanaka. When that was done, everyone went on their way to enjoy the exciting sights of the Super GT cars and Super GT queens. It was truly an enjoyable pre-race day.