The objective of this annual National Dealers Convention is to create a time of networking and sharing of best practices amongst Honda dealers and for Honda Malaysia to impart its vision and goals for the coming year to their dealers. At the same time, Honda Malaysia appreciates and recognizes those who have excelled in the areas of Sales, Service and Spare Parts operations in an Awards Ceremony. A challenge trophy was also presented to the “Dealer of the Year”.

The theme for this year’s National Dealers Convention is “Commitment To Excel”. Representatives from Honda Malaysia shared and presented on overall performance of sales, service as well as spare parts for year 2007 and strategies for year 2008. Besides reviewing performance of the past year, dealers were also challenged to align themselves with Honda Malaysia in facing the challenges of the coming year.

In his speech during the convention, Honda Malaysia Managing Director and Chief Executive Officer, Mr. Atsushi Fujimoto said, "The automotive industry in Malaysia is getting more competitive than ever. As we ‘changed for the best’ last year, we need to keep improving and be ‘committed to excel’. Overall, Honda Malaysia has had a good year in 2007. We targeted sales of 28,000 units and we are confident of achieving our target this year."

Mr. Fujimoto also urged and reminded dealers of the need to greatly improve on their sales satisfaction and customer satisfaction, even as Honda looks forward to increase sales volume in 2008.

Throughout the convention, Honda Malaysia reiterated its commitment to improve on quality of products, increase production supply, create greater brand awareness as well as bringing in new products in support of their dealers.

The awards presented to the dealers during the awards ceremony were Best Service and Spare Parts Award 2007, Best Sales Performance Award 2007 and Dealer of the Year 2007. 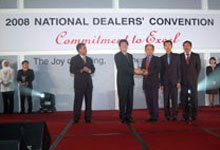 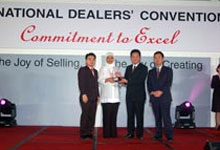 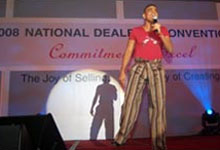 In expressing his delight on the win, Dealer of the Year 2007 Mr. Tay Geok Seng, who hails from Muar, Johor, said, “Firstly, I thank Honda for providing the guidance and support to us dealers throughout the years. Part of my success is attributed to Honda’s support and quality products. As a dealer, it is very important to instill confidence and trust amongst our customers. This is what I keep reminding my staff; the importance of customer satisfaction, serving customers sincerely and retaining them by excelling in after sales service.”

Mr. Tay has been selling Honda cars for more than 20 years and was the first dealer to have the foresight of upgrading his centre into a 3S centre.

The 2008 National Dealers Convention ended with a night of good food, great company and wonderful entertainment by Reshmonu and Phua Chu Kang. 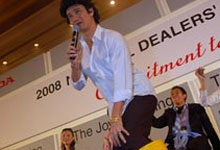 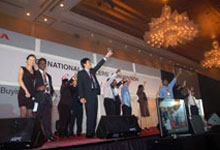 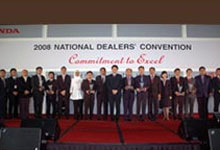