On the sunny morning of March 20, 2007, thirty four journalists descended at the Sultan Mahmud Airport in Kuala Terengganu en route to Tg. Jara for the All New CR-V Exclusive Media Test Drive. 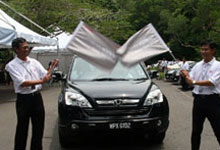 The event was organised by Honda Malaysia to give the media a firsthand experience driving the All New CR-V which was launched in Kuala Lumpur on March 8. The media test drive intended to provide the media a demonstration of the unique features of the All New CR-V, which included the premium sedan driving feel, versatile spaciousness and interior comfort.

Honda Malaysia spared no efforts in making sure that the media were able to fully experience the vehicle as well as understand the R&D that went into making the All New CR-V. This included the presence of Mr. Kenichi Ohkawara, Chief Engineer of Honda R&D Co., Ltd. Automobile R&D Center and Assistant Large Project Leader of the All New CR-V. who flew in from Japan just for the media test drive. While Mr. Ohkawara provided development concept and technical insights of the All New CR-V, he was joint by a panelist from Honda Malaysia to address media queries. On the panel were Mr. Kamarudin Abdul Kadir, President and Chief Operating Office; Mr. Kenji Tanaka, Vice President and Mr. Akkbar Danial, Head of Product Planning.

The media were given a recommended test route which has been identified to be able to bring out the features of the vehicle for the media to experience during the drive. This included imperfect road conditions, bends and quieter stretches of road.

A special CR-V kitted with Modulo accessories were also put on display. Mr. Ohkawara was present at the display car to personally demonstrate and explain to the media the versatility of the double deck cargo shelf, back passenger seat configurations as well as the powertrain, amongst others.

Thought and care were also given in the venue choice for this event to further reflect the premium status of the All New CR-V. Tg. Jara Resort, which is renowned for its luxurious experience was the ideal venue, tying in beautifully with the concept of the vehicle besides providing a restful setting after a taxing day. The programme had the media catching a flight at dawn and then, working through to dusk, ended with a barbeque dinner before the media retire for the night.

Overall, the event and All New CR-V received a thumbs-up vote from the media. While the programme was a taxing one on the media, the media were lively and interacted with the Honda team on-site. And judging from the number of questions asked at the Q&A session after they have completed the media test drive, they agree the All New CR-V is completely different from its predecessor and fully embodies the phrase "premium sedan driving experience". A couple of the journalists who were passengers even fell asleep while their colleagues were driving. This certainly attests to the comfort of the All New CR-V! 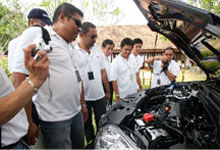 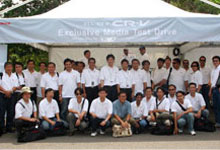