Special! That was the feeling of the night, when a total of 370 Honda owners and their spouses were treated to an exclusive All New CR-V Night. The night event which was organized especially for Honda customers was not just about cars but it is about having the opportunity to express gratitude to customers for the loyalty and contribution towards Honda's success. 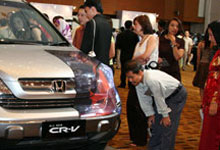 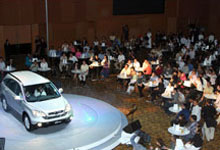 As Honda takes every possible opportunity to go the extra mile to put customers first, the All New CR-V Night was meant to do exactly that. Attention were paid to even the minutest of details - from the food, entertainment down to having Honda staff in the ratio of 1 to 15 guests! All the efforts were geared towards making the guests feel special, and the night a memorable one for them.

Although the star of the night was the All New CR-V, it was the customers' presence and their keen interest as they viewed the SUV which was launched in the morning of that very same day, that made the night an outstanding one.

The audience experienced the same unveiling of the All New CR-V and more, when Ning Baizura came on stage to entertain the guests with a carefully selected repertoire of songs. Making her appearance in a stunning red gown, she sang songs in English, Malay and Chinese. To convey her feelings for the All New CR-V, which she said she fell in love at first sight, she performed a Japanese song by Utada Hikaru entitled First Love - much to the audience's delight. Ning also went around shaking hands, thanking guests for attending, and capturing photos with them.

For the event, Honda brought a total of 7 units of the All New CR-V so that the guests can have a closer look at their leisure. Also on display were a Cut Body and a cross-section of the i-VTEC engine which is being used to power the All New CR-V. With product specialists on standby to explain the vehicle, Honda aimed to provide customers a better understanding of the vehicle as well.

Among the Honda customers who were present at the event, was Encik Ahmad Yasir, 30, from Setapak who is a car lover and an owner of the Honda Civic type ES. He said, "We are planning to get the All New CR-V as the number 1 family car. I like Honda vehicles because of its quality, reliability and its good fuel consumption". Besides the Civic, Yasir's family also owns a Honda City.

Being a car lover, Yasir reads up on car engines voraciously. His understanding of the efficiency of the i-VTEC engine was amazing.

Also present at the All New CR-V Night were Mr. Jack Tan, President of the Malaysia Honda Jazz Club and Tommy Khoo, President of Team City. Both Tan and Khoo said that the All New CR-V is a value buy and they are shocked at how low the price is. "This is a car that is trendy yet functional. For RM147,800, it is definitely a value buy. Not to mention also, the design of the All New CR-V has taken into consideration the differences between male and female drivers and the vehicle is suitable for both," said Tan and Khoo.

A couple, Mr and Mrs Loh from Kuala Lumpur have been studying the All New CR-V since it was launched in North America and Japan was even more impressed when they viewed the vehicle up close. Mr Loh said, "The actual car is far better than the photos in the forums which I have following."

As the event drew to a close at about 11pm, some of the guests continued to linger, talking with Honda Malaysia staff while taking another look at the All New CR-V. Always appreciating feedback and the opportunity to interact with their customers, Honda Malaysia is certainly looking forward to next customer event.

The All New CR-V will be available at all Honda Showrooms throughout Malaysia from 8 March 2007 onwards. 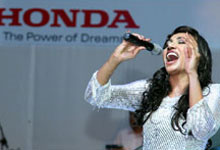 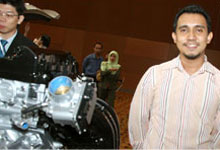 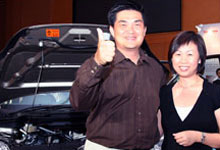