The highly anticipated All New Accord, the eighth generation of the luxury sedan has finally arrived on Malaysian shores! With an illustrious history that spans across more than 30 years, during which it has grown into a global car with a legacy of awards and innovations, the All New Accord was officially launched on 22nd April at the Kuala Lumpur Convention Center before the presence of 209 media members, 77 authorized Honda dealers' representatives and 68 guests. 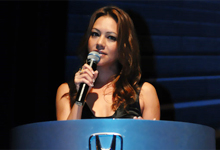 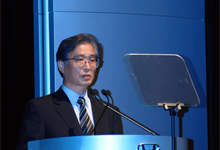 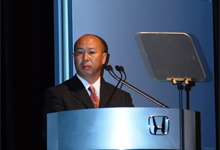 The launch event kicked off with emcee, Paula Malai Ali, welcoming the guests and inviting them to view a short video on the All New Honda Accord. This was followed by a speech by Mr. Kenzo Suzuki, Executive Chief Engineer and Representative of Automobile Development from Honda Motor Co. Ltd, who shared the development concept behind the All New Accord. According to Mr. Suzuki, the overall concept for the All New Accord was a combination of luxury and sportiness, with advanced technology to elevate the fundamental dynamic performance of the vehicle. Next, Mr. Satoru Azumi, Chief Engineer and Assistant Large Project Leader of Honda R&D Co. Ltd, Automobile R&D Center, gave a technical presentation on the All New Accord. 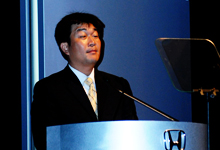 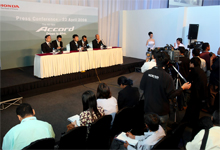 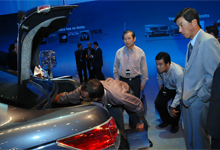 Media taking a closer look at the All-New Accord.

After which, Managing Director and Chief Executive Officer of Honda Malaysia, Mr. Atsushi Fujimoto presented the final speech of the day. Mr. Fujimoto thanked loyal customers and media for their interest and patience in waiting for the arrival of the All New Accord. In his speech, he shared the marketing campaign concept, led by the tagline Driven to Drive, which aims to position the All New Accord as an aspiring symbol of success and ambition. Mr. Fujimoto also highlighted the Accord's sophisticated styling, key features and new offerings that came with the sedan. He added that the All New Accord will further enhance customers' perception of the Honda's flagship model and akin it to a statement of luxury and performance. Mr. Fujimoto ended his speech by announcing that the All New Accord is now available at all authorized Honda dealers, and proceeded to present a screening of the sedan's television commercial.

The unveiling of the All New Accord was spectacular. For the first time, a Honda car was unveiled with a live stage musical presentation, to the tune of "It's a Kind of Magic"! Media photographers were well positioned in front of the car before the unveiling took place. When the sedan was uncovered, cameras clicked away for about a good 10 minutes before the media photographers settled. Some of them lingered on to get better shots of the new car as the emcee announced the end of the event and invited members of the media to proceed to the Press Conference area.

The remaining guests adjourned to another Hall to have lunch and have a look at the new Accord at close range. On display were three units of the 2.0-liter SOHC i-VTEC models; two units of the 2.4 DOHC i-VTEC models, of which one was fitted with the full Modulo kit; and one unit of V6 3.5-liter i-VTEC VCM model. The Press Conference lasted 30 minutes with questions ranging from marketing campaign to technical issues related to the All New Accord.

The eighth generation Accord was definitely the topic of conversation even as the guests and media were helping themselves to lunch.

"In addition to the new 2.0 and 2.4 Accords, Honda Malaysia once again has proven itself to be a car company that is willing to take risks by bringing in the new 3.5 V6 Accord variant; the first Japanese car available locally with VCM (Variable Cylinder Management). We should be used to Honda Malaysia for thinking out of the box by now, seeing how they were also the first to introduce an environmentally-friendly, fuel-efficient, bi-propulsion car in the form of the Civic Hybrid, as well as a low-volume 'specialty' car like the Civic Type-R," said Mr. Chris Wee, Editor of EVO Magazine. He added, "Bringing in the latest and best models to Malaysia seems to be a norm with Honda Malaysia. So job well done I say!" 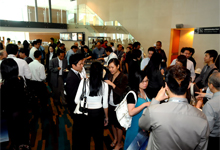 Media enjoying refreshment while awaiting for the launch. 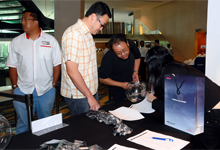 Media registering for the launch.

Mr. Chips Yap from motortrader.com.my felt that the "All new Accord has a lot of advanced technology, practical innovations and an excellent design which put it as a leader in its class."

All in all, the launch of the All New Honda Accord took place smoothly and the guests in attendance were all excited about its arrival.