Petaling Jaya, 28 November 2007 - Honda Malaysia once again won honours in the NST-Maybank "Car of the Year 2007" Award through its 3rd generation Honda CR-V which was named "SUV of the Year". 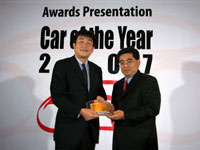 Launched in March this year, the CR-V has received overwhelming response from the Malaysian public. Within the first 4 months of its launch, sales of the new Honda CR-V has exceeded the full year target and is still going strong, attesting to the premium sedan driving appeal of the sport utility vehicle (SUV).

Honda Malaysia had targeted to sell 3,600 units in the first year of its launch. But, having gained mass acceptance and rave reviews, sales as at November 2007 have reached close to 5,000 units, with another 1,000 units in order book as at November 28, 2007.

The SUV segment in Malaysia simply cannot ignore the strong presence of the CR-V. In the period of March to October 2007, the CR-V holds 47.1% market share in the non-national SUV segment as compared to 11.8% for the corresponding period in 2006.

Honda Malaysia Managing Director and Chief Executive Officer Mr. Atsushi Fujimoto said, "The win this year and also the mass acceptance of the CR-V are a testimony of the constant challenge that Honda embraces in setting exemplary product quality and customer satisfaction benchmark for automotive players in this country and around the world."

The sedan-like driving experience of this CR-V has redefined the SUV industry and set new benchmarks. This CR-V incorporates elements that further elevate the Honda brand, which are dynamic and emotional design, sedan-like driving comfort and performance, unrivaled versatility and advanced safety technologies.

Just two months ago, the CR-V won the Autocar ASEAN Overall Car of the Year 2006/2007 as well as the category award for Mid Size SUV. Besides Malaysia, the CR-V has also grabbed the "Thailand Car of The Year Award" in the "Best SUV" category in April this year.

Last year, the 8th Generation Honda Civic 2.0S grabbed the "Family Car Category"title as well as "Overall Car of the Year 2006" for the NST-Ambank Group 2006 Car of the Year Award.

The NST Car of The Year Awards, currently running in its 6th year is held in high regard by car manufacturers in Malaysia. This year's NST-Maybank Car of the Year Awards 2007 finalists were chosen from new cars launched in 2007. The judging criteria include exterior styling, comfort, ergonomics, performance and safety.

The CR-V fulfills all these criteria to a tee. It is not surprising that demanding professionals who appreaciate a fuel efficient SUV that accords comfortable driving experience are clamouring to own this benchmark SUV. The versatility of this SUV ensures that it can stylishly function as a daily vehicle, a family car or a vehicle that complements an active outdoor lifestyle.

Some of the more popular features of this CR-V are the Double Deck load shelf for smart, organized storage; spacious interior, telescopic steering wheel and world-class safety features incorporated into the SUV.