Petaling Jaya, 17 September 2007 - Honda did it again - two years in a row! The 3rd generation Honda CR-V which was launched in March this year has just been announced the winner of Autocar ASEAN Overall Car of the Year 2006/2007! The CR-V also took home the category award for Mid Size SUV while the Honda Odyssey 2.4 was awarded the winner of the Large MPV category. 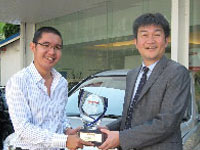 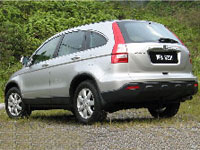 The Autocar ASEAN Car of the Year Awards, currently running in its fourth year is held in esteem by car manufacturers in Malaysia. Honda Malaysia has created a record by winning three out of the four awards that has been given away - the Honda Accord 2.0 won the award in its inaugural year, the Honda Civic 2.0S took home the award last year in 2006 while the CR-V 2.0 grabbed this year's award.

Editor of Autocar ASEAN, Denis Wong, commented about the CR-V, "Like the Honda Civic that ran away with the last one, the new CR-V is another product that sets new benchmarks. It doesn't just beat the competition with its stunning build quality, it can even stand up to any premium SUV out there (and shame a few), that's how well it is made."

He also said that Honda engineers managed to make the CR-V the best driving, best riding SUV/crossover of its kind.

In 2006, Honda achieved No:1 for the 3rd consecutive year in the J.D. Power Asia Pacific 2006 Malaysia Initial Quality Study (IQS). The Honda Civic 2.0S emerged No.1 in its category. At the same time, Honda Civic 2.0S also bagged four "Car of the Year" awards, which were Autocar Asean "Overall Winner for Car of the Year 2005/2006", Winner of Midsize Sedan/Hatchback Category, NST Ambank Group 2006 Car of the Year Award and also became the winner of the family car category.

In expressing his delight over the win, Honda Malaysia Managing Director and Chief Executive Officer Mr. Atsushi Fujimoto said, "This is a historical milestone for Honda and credit goes to all Honda associates, who have worked very hard on the new CR-V. Delivering quality products and service to our customers has always been our priority."

"With its distinctive look, features and performance, this CR-V has attracted SUV lovers as well as sedan owners. The sedan-like driving experience of this CR-V has redefined the SUV industry and set new benchmarks. Malaysians has indeed taken well to this new CR-V with its emotional design that creates a feeling of instant attraction. Based on our survey findings among new CR-V owners, the CR-V is perceived as an elegant and comfortable family vehicle. The attractive design coupled with the comfortable and convenient interior features makes the CR-V an ideal choice for their family," added Mr. Fujimoto.

Some of the more popular features of this CR-V are the Double Deck load shelf for smart, organized storage; spacious interior, telescopic steering wheel and world-class safety features incorporated into the SUV.

Besides Malaysia, this 3rd generation Honda CR-V has also grabbed the "Thailand Car of The Year Award" in the "Best SUV" category in April this year.