Using the platform of 'Discovery', Honda Malaysia invites Malaysians to "Discover the Performance" of the revolutionary Civic Type R and to "Discover the Innovation" of the advanced technology Civic Hybrid. 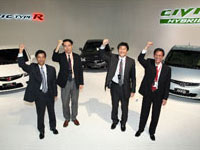 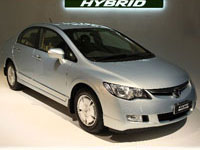 Honda Malaysia Sdn Bhd Managing Director and Chief Executive Officer Mr Atsushi Fujimoto expressed his delight over the significance of the launch, "Today is a very historic day for Honda Malaysia. With the introduction of the Civic Type R and Civic Hybrid, Malaysia now has the same line-up of the 8th Generation Civic as Japan. And making it even more memorable, is the fact that Malaysia is the only country in Asia, outside of Japan that is making available for our customers this version of the Civic Type R."

The Type R is built on the concept of the highest performance with the best control for a car. Honda first introduced the Type R in 1992 on the NSX as a specially tuned model that provided racing car-like feel. It was later extended to the Integra in 1995, and the Civic in 1997 in response to meeting customers' request for more opportunity to own a Type R.

The Type R has since became the benchmark for cars designed to be a true driver's car that gives speed, control and precision in one complete package, and is desired by performance car enthusiasts in Japan and all around the world. The All New Civic Type R aims to achieve unity of man and machine for the ultimate driving experience in all driving conditions, including on circuits. 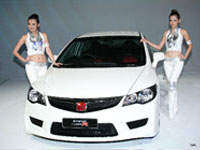 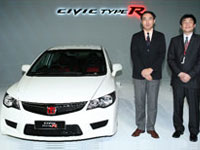 The latest Honda Civic Type R is the refinement of 15 years of technological progress and the latest expression of Honda's Racing Spirit.

Honda Malaysia expects that the new Civic Type R will increase the group of performance vehicle enthusiasts in Malaysia who seek outstanding performance in a car that gives the driver the finest control at the same time.

While the Civic Type R is a model of precision engineering, the Civic Hybrid raises the standard for environmentally-friendly, advanced automotive technology. The Civic Hybrid is built on a dream of developing green vehicle that is gentle on the environment, yet uncompromising on design aesthetics and driving pleasure.

Honda first introduced the Integrated Motor Assist, or better known as IMA, hybrid technology in 1999. This technology was extended to the Civic family in 2003 and over the years, Honda engineers have fine-tuned the system.

The new hybrid system in the Civic Hybrid draws its power from an engine assisted by an electronic battery and pushed back to the electric motor, resulting in increased driving performance, reduced emission and enhanced fuel consumption.

Honda Malaysia believes that the Civic Hybrid will create a new group of customers in Malaysia, who are not just environmentally conscious but also value the efficiency and fuel economy of the i-VTEC and IMA hybrid system. These customers appreciate innovation and advanced technology in their choices of vehicles whilst not compromising on design and driving pleasure.

Mr Fujimoto added that both the Civic Type R and Civic Hybrid are results of technology and innovation working beautifully hand in hand.

In his speech, Mr Kaname Tokita, Chief Engineer for Civic, Honda R&D Co., Ltd. Automobile R&D Centre said, "Both the Civic Type R and Civic Hybrid are the epitome of Honda's passion in advanced and precision technology, innovation and commitment to care for the environment. As the Chief Engineer for Civic, I am very proud to bring two of the most technologically advanced vehicles to Malaysia. I am confident that both models will set new benchmarks in performance vehicle and green vehicle respectively in Malaysia."

The All New Civic Type R comes in Championship White while the Civic Hybrid is available in Fluorite Silver Metallic.

The All New Civic Type R and Civic Hybrid will be open for bookings at all Honda Showrooms throughout Malaysia from today, August 2, onwards. At the moment, customers can view the cars at selected Honda authorized dealers from August 13 onwards.