Petaling Jaya, 17 July 2007 - Honda Civic, Honda Civic Hybrid and Honda Civic Type R. This is the line up of Honda Civic Sedans in Japan. The 8th Gen Honda Civic is the icon of revolution in engineering technology. And, the Type R and Hybrid took it a step further. 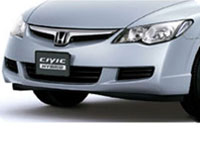 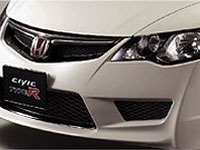 In Malaysia, the 8th Gen Honda Civic 1.8S and 2.0S which was launched in March 2006 still remains one of the most popular mid-size sedans. This Civic continues to evoke desirability with its sleek and stylish looks, smooth drivability, comfort and fuel efficiency; winning it the only two Car of The Year (COTY) Awards in this country namely the NST-Ambank COTY and the Autocar Asean COTY, as well as the JD Power Asia Pacific Initial Quality Study (IQS) Award. Since its launch, the 8th Gen Honda Civic has successfully sold close to 13,000 units in Malaysia.

The Type R needs no introduction. Type R represents the heritage and the dreams of Honda. It is deeply rooted in Honda's racing heritage, a product of Honda's Challenging Spirit. It all started in 1964 when Honda entered its first Formula 1 race bearing the now famous Red H badge.

Through the years, Honda continued to develop its technology and the Type R evolved from the NSX in 1992, and the range was extended to the Integra in 1995, and the Civic in 1997. The Type R is accorded a "cult status" and has a base of loyal fans all around the world.

The latest Honda Civic Type R is the distillation of 15 years of technological progress and the latest expression of Honda's Racing Spirit.

The latest Civic Type R is available in two versions for the European and Japan market. The version for Europe market is a three door hatchback while the four door sedan version is only available in Japan.

Directly descended from the Honda Compound Vortex Controlled Combustion (CVCC), which was the first to pass the Clean Air Act emissions requirement without a catalyst, the latest Civic Hybrid wows with a futuristic shape and high-tech features. Today's Civic Hybrid represents the very latest in Honda's commitment to positive environmental change without compromising on the fun of driving. This latest Honda Civic Hybrid recently won the 2006 World Green Car Award in the United States.

Indeed, both the Civic Type-R and the Civic Hybrid are portrayals of Honda's deep-rooted passion. Passion in performance and motorsports as well as passion in advanced technology and environmental preservation.