Honda revving up F1 fever in Malaysia through roadshows

Petaling Jaya, 19 March 2007 – Maze Challenge. PS2 Race. Jigsaw Puzzle. Prizes up for grabs. These are some of the exciting activities that Honda Malaysia has lined up for Malaysians throughout Klang Valley, Johor Bharu and Penang from now till 8 April, last day of F1 in Sepang.

Honda Malaysia is bringing the thrill of Formula One and motorsports to fellow Malaysians through a series of roadshows in these three cities. At the same time, Honda is also excited to share with Malaysians a glimpse of the challenges, exhilaration and team unity in motorsports, which have become synonymous with the DNA of Honda. 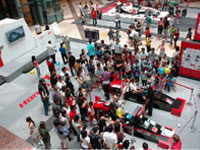 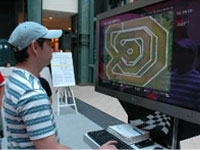 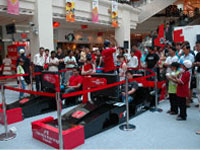 Through the information shared, games and activities organised and display of the 2006 race cars, Malaysians can participate and experience the Challenging Spirit of Honda displayed most prominently through its participation in motorsports.

Mr Yasuhide Mizuno, Managing Director and Chief Executive Officer of Honda Malaysia Sdn Bhd said, "Honda's heritage in racing goes way back to our roots and our founder, Mr Soichiro Honda. Rising to the challenges in motorsports is deeply rooted in Honda's DNA, the essence of Mr. Soichiro Honda's philosophy of dreams and realising dreams by overcoming challenges."

"It all started in 1959 when Mr Soichiro Honda decided to enter Honda motorcycles in the Isle of Man TT races despite being a small company at that time. That bold decision was an influential moment in the company's history as it raised awareness of the company throughout the world. It was a clear demonstration of the Challenging Spirit that has now become Honda's DNA," added Mr Mizuno.

Honda's first entry into Formula One came in 1964 with the RA271 engine, just after Honda's first automobile production in 1962. The 1.5L V12 engine was uniquely mounted transversely behind the driver. Honda entered three races, finishing none of them. Honda's development team went back to the drawing board to redesign a new car for the following season – motivated by the challenging spirit and determination to succeed. On October 24, 1965, at the Mexico Grand Prix, driver Richie Ginther took Honda to its first ever Formula One victory.

Years down the road, Honda's radical engine performance still dominate F1. In 1988, Honda's V6 engine was the talk of F1 as it brought Honda 15 victories from 16 starts. And in 2006, Honda's RA806E V8 engine powered Jenson Button to victory at the Hungarian Grand Prix.

This year, Honda will be challenging for the coveted F1 Championship Drivers and Constructors titles with a brand new engine, the RA807E, featured in the RA107. But that is not all. As Mr. Soichiro Honda once said, "Without racing, there is no Honda". Racing and motorsports is in the core of Honda's DNA. It is Honda's reason to exist.

The F1 roadshows will be held as follows:

Enviable prizes such as Grandstand tickets at the F1 and a tour to the Honda F1 Racing Team's pit are up for grabs throughout the roadshow and as well as the online contest. From the 15th till 28th March 2007, F1 enthusiast can log on to www.honda.com.my to stand a chance to walk away with prizes. Games include racing stimulations and simple questions on the history of the F1 engine and challenges. The contestant with the fastest time to complete the game, wins!

Come join in the excitement, plan your trip to the nearest Honda F1 roadshow or log on to the website now.