Jazz and Stream to the Beat at Honda Roadshow

Selangor, 7 January 2008 - A very unique and extraordinary approach to roadshows can be seen in Malaysia. Honda Malaysia Sdn Bhd is currently running a series of roadshows to 'musically' demonstrate the practical features of the stylish Honda Jazz 1.5 VTEC in three states around Peninsular Malaysia from January 3, 2008 till January 20, 2008. The All-New Honda Stream 1.8 i-VTEC will also be displayed at the roadshow, which is held in One Utama, Petaling Jaya.

Both the Honda Jazz and the All-New Honda Stream were designed with the young, stylish image of today's modern lifestyle in mind. The trendy looks are complemented with practicality and driver-friendly features. 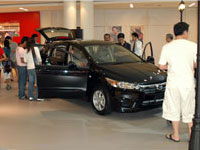 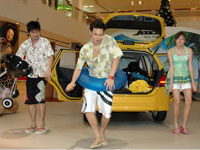 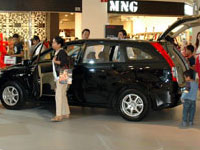 The roadshows seek to showcase in an unconventional way, the spaciousness of the Honda Jazz via trendy, musical elements. The snazzy Honda Jazz is by far the only subcompact car in Malaysia that offers unrivalled interior spacious versatility with its Ultra Seat capability, a feature unique to the Honda Jazz. The Ultra Seat comes in three modes for tall, long and bulky items. 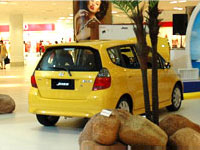 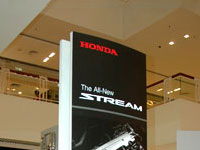 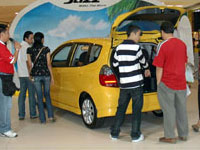 The Honda Jazz was first introduced in 2001 and is popularly known as Honda Fit in Japan. Since its launch, the Honda Jazz has sold more than 2 million units in 117 countries worldwide. The Honda Jazz is the acknowledged leader in the subcompact segment. The current facelifted Honda Jazz was launched in Malaysia in August 2006.

The newly launched second generation 7-seater MPV Honda Stream 1.8-liter i-VTEC is also on display at these roadshows. The All-New Stream appeals to those who appreciate a young, urban and classy image, but need the practicality of a MPV. The newly improved features of the All-New Stream are tailored to change customers' perception of the MPV from conventional to stylish and versatile '7-seater for two' that suits the lifestyle of young and urban individuals who enjoy the fun of driving.

Since its launch on 21st November 2007, the All-New Stream has recorded sales of more than 500 bookings.

According to HMSB Managing Director & Chief Executive Officer, Mr Atsushi Fujimoto, both the Honda Jazz and the All-New Honda Stream caters to a unique group of people who appreciates practicality yet do not want to compromise on style and the fun of driving. The All-New Honda Stream is ideal for the young market who wants the practicality of a conventional MPV yet do not want to compromise on their stylishness.

Malaysians can visit these roadshows at the following venues:

Come and dance to the beat while finding out more about the features of the Honda Jazz and All-New Honda Stream.