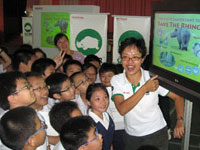 Standard 4 students of SJKC Han Chiang getting a closer look and briefing on Save Our Sumatran Rhino project; observed by headmistress Puan Tan at the back. 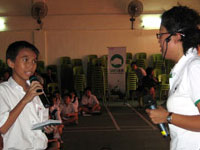 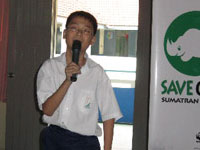 Standard 5 student Aaron Lim Pek Qin, 11, sharing his thoughts on the environment with his schoolmates.

Penang is the first destination outside Klang Valley that Honda Malaysia is conducting talks on the environment and Sumatran Rhino. The Penang leg reached out to about 1,000 students in 4 schools such as SJKC Perempuan China, SK Batu Lanchang, SK Bayan Lepas and SJKC Han Chiang.

To make the talks more engaging and in order to help students to understand the environment better, the speaker showed video clips and footages of Sumatran Rhino. Quiz sessions on what the students can do to help the environment ensured that this generation-of-tomorrow think of proactive actions in doing their part to help conserve the environment.

Honda Malaysia Managing Director and Chief Executive Officer, Mr Atsushi Fujimoto said, "Through these efforts, we hope our children will learn to be more aware of the environment and care for it. We also want to help them to develop good habits such as conserving water and electricity, and proper disposal of waste and rubbish to give the Mother Nature a hand. We believe that when each of us do our own small part, collectively we will have a positive impact on preserving a home for the Sumatran Rhinos."

The talks started in Klang Valley last year and have since been to 20 schools, speaking to more than 4,000 students in Standard 4 and 5.

The Rhino Rescue Project started 3 years ago when Honda Malaysia initiated and made a 5-year commitment in the Save our Sumatran Rhino project to save this species of two-horned rhinocerous from extinction. The project seeks to study and understand the Sumatran Rhino, one of the most endangered animals species in Malaysia; and also to create more awareness on the environment and the need for mankind to care for the habitat of wildlife to ensure species survival.

Honda Malaysia is focused in its efforts to raise awareness and the school talks are one of the many activities it has undertaken. Earlier this year, Honda Malaysia organised the Environment & I Essay and Photo Contest for primary school children in Malaysia. This contest received close to 620 entries from all over Malaysia.

School children throughout Malaysia stand to benefit from these activities and talks on the environment and Sumatran Rhino as Honda continues in its efforts to create more awareness amongst the future generation. The next round of the talks will be held in Johor Bahru. In addition to this, there are regular roadshows to raise awareness amongst the general public and to motivate them to do their part towards caring for the environment.