Petaling Jaya, 2 June 2008 - Honda Malaysia recently organized a prize giving ceremony to present prizes to all the winners of The Environment and I essay and photo contest. It was indeed a rewarding time for all the young winners and their hard work.

The winners attended the prize giving ceremony which was held during the Honda Malaysia Rhino Discovery Roadshow in Ikano Power Centre, Mutiara Damansara with their families as well as representatives from their schools. A total of RM45,000.00 worth of prizes were given out to the 14 winners of the contest. 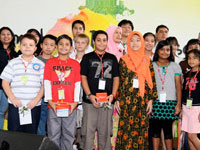 All the winners with Honda management and WWF representatives. 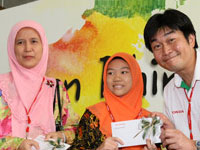 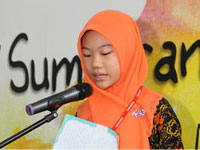 The Grand Prize winner, Ungku Farah Wahidah Ungku Ismail of Sekolah Kebangsaan Convent, Batu Pahat won a travel package for 2 adults and 1 child to Sepilok, Sabah while her school received RM800.00 worth of book vouchers. She was given the honour of reading a portion of her winning essay to the public after receiving her prize.

Beaming with excitement, the Grand Prize Winner Ungku Farah said, "I was so excited that I couldn't sleep last night. This is very memorable because tomorrow is my birthday! It is the best birthday gift for me." 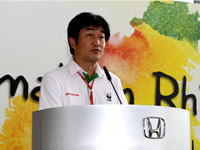 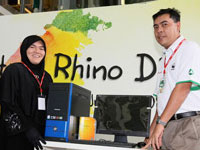 Participating in contests is not new to Ungku Farah as she loves the challenge that comes with it. "It was the most challenging contest that I have participated in so far. I took 7 days to complete the essay and drawing as I also had to prepare for my exams. I researched for information from newspapers and books for my essay."

Commenting on the contest, Honda Malaysia Managing Director and Chief Executive Officer Mr. Atsushi Fujimoto said, "The purpose of this contest is to encourage our future generations to care for the environment and at the same time to increase awareness and build understanding on environment conservation and extinction especially amongst primary school students." 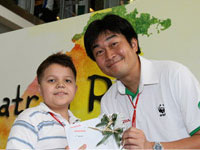 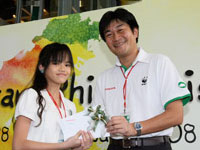 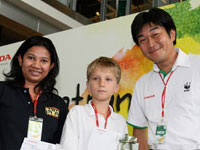 Mr. Fujimoto said that in participating, students were encouraged to share their ideas on how to save the environment that they can practise in their daily lives and submit it together with a photo of the activity.

"We believe that through this contest, our children will have a better understanding of the importance of environment conservation and its effect on animal extinction."

Mr. Fujimoto also said that Honda Malaysia, being the first corporate to initiate rescue efforts for the Sumatran Rhino, is pleased to sustain this meaningful programme through a 5-year commitment and partnership with WWF-Malaysia.

Globally, Honda aims to give back to the society and environment as Honda strives to become a company that society wants to exist. And the same effort is extended to Malaysia as well.

The "Environment and I" essay and photo contest was held throughout the month of April 2008 and was opened to all primary school students in Malaysia. Students who participated in this contest were required to write an essay between 400-800 words, in Malay or English. Each essay was accompanied by a 4R-size photo with caption on an activity undertaken by the participant and their family members to help conserve the environment.

The contest received overwhelming response from the students as well as schools. Some of the schools called and requested for an extension to the deadline, as they wanted to participate as a class project. Honda received close to 620 entries from all over Malaysia.

Apart from the contest, Honda Malaysia has also taken the initiative to embark on awareness building programmes through school talks and above the line communications as well as roadshows. To date, more than 4,000 students in 20 schools throughout Klang Valley have benefited from these talks on saving the Sumatran Rhino and caring for the environment.

Continuing on the momentum built from the schools talks and the "Environment and I" Essay and Photo contest is the ongoing Rhino Discovery roadshow which started on 28 May 2008 and will continue till 1 June 2008. Another roadshow will be held at Sunway Pyramid, Petaling Jaya on 6 - 8 June 2008.

The objective of the roadshows is to create greater awareness and understanding amongst the public of the need to care for the environment and the plight of Sumatran Rhinos in Malaysia.

Winners of the "Environment and I" Essay and Photo Contest: