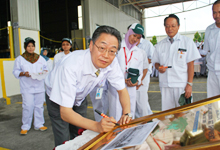 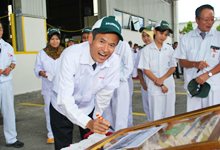 Mr. Toru Takahashi, MD and CEO of HMSB posing before signing the plaque. 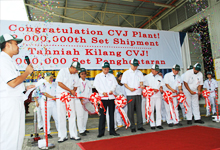 While speaking at the momentous occasion, Mr. Toru Takahashi paid tribute of the historical milestone to all Honda's valued associates. He said "This remarkable achievement of CVJ is by abiding to our company principle in supplying products and services of the highest quality at reasonable prices. This helps us to ensure worldwide customer satisfaction".

While addressing the associates, Mr. Masafumi Suzuki remarked that the Pegoh Plant in Melaka is the biggest CVJ exporter in the region. During his annual visits to Honda Malaysia, he always noticed and is impressed by the continuous improvements performed on the production. 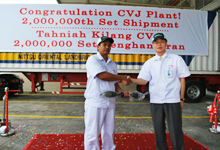 Mr. Masafumi Suzuki passing the No. 2 millionth CVJ to a HMSB associate before loading it onto the lorry. 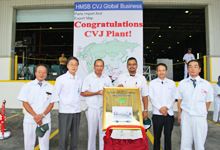 CVJ, or more commonly known as the driveshaft, is an integral mechanical device, which transfers the power from the engine to the wheels. Manufactured under stringent controls, CVJ is instrumental in ensuring the safety for all Honda cars as it allows the driver to have the ultimate control over the car's movement.

The CVJ manufactured in the Pegoh Plant was initially produced for Honda City and Honda CR-V back then in 2002. Today, the production of the CVJs have increased to include 4 other models namely Honda Jazz, Honda Accord, Honda Civic and Honda Freed. In 2007, Honda Malaysia made its first millionth shipment.