In conjunction with the special announcement, Mr. Toru Takahashi, the Managing Director and Chief Executive Officer of Honda Malaysia said, "Since its establishment in 2001, Honda Malaysia has progressed and improved relentlessly in order to fulfil the evolving needs and demands of the Malaysian public. And thanks to the support and trust we garnered from our loyal customers, business partners and associates, Honda has grown to be one of the most preferred choices among the Malaysians."

Striving for continued excellence, Mr. Takahashi emphasised that, "With this 200,000 passing mark, we are even more committed to strive further in providing products, sales and after-sales services of highest quality yet at a reasonable price to our customers. It is also our utmost priority to contribute back to society wherever we operate through our Corporate Social Responsibility projects such as Honda Dreams Fund and Save Our Sumatran Rhino. Ultimately, we aim to become a company that society wants to exist."

Honda Malaysia currently offers a wide array of lineup including four complete knock down units (CKD), namely City, Civic, Accord, CR-V, which contributed 40%, 21%, 18%, 12% respectively to the 200,000 sales. The other five complete built up (CBU) models offered in the lineup are (CBU) Jazz, Stream, Civic Hybrid, Civic Type R and Odyssey.

In the year 2009, despite the tough and challenging economic situation, Honda Malaysia still managed an upward sales performance, which was attributed to the staples City and Civic. Total sales now stand at 36,096 units (as of 30 November 2009), which sees 17% growth year-on-year. Folllowing the overwhelming response received from the market, Honda Malaysia has revised its sales target of 35,000 units to 38,000 units recently. 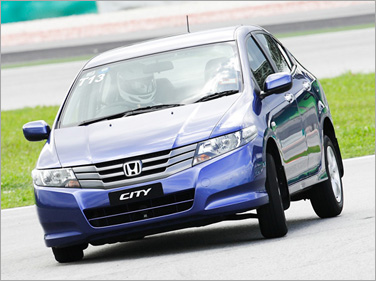 Strongly supported by a network of 58 authorised dealers in 12 states, Honda Malaysia aims to provide products, sales and after-sales services of highest quality at reasonable prices to the Malaysian public.