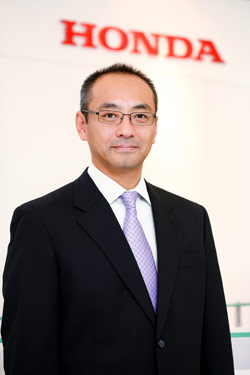 Ueno, 47, was previously the Assistant Vice President of Automobile Sales of American Honda Motor Co. Inc., where he was involved in the overall planning and coordination of national sales and marketing in the US market. He brought with him over 20 years of working experience in Honda's automobile business and a wealth of knowledge in the global automotive industry, having served markets outside Japan like New Zealand and Thailand, and worked with overseas division and countries such as Asia & Oceania, China and North America.

Ueno talked about his last experience at American Honda. "Although I was involved in strategizing the sales and marketing operation on the national level, I had a lot of opportunities to visit dealers in various states, which helped me understand the different business circumstances in each area, find out the common issues and propose the best plan to be executed on the nationwide scale. I was also deeply involved in improving inventory efficiency, such as sales and production planning, minimizing the inventory balance amongst dealers and enhancing logistic efficiency."

Commenting on his transition from the US to Malaysia market, Ueno said: "US is a large country and it has the biggest sales volume of Honda cars worldwide. In order to manage the big volume and the large number of dealers, American Honda has a very advanced system and logistic network. However, the process in which every customer makes a purchase at a Honda dealership is the same regardless the size of the market. The approach to maximize a customer's satisfaction is also the same."

He continued: "As the price of new cars in Malaysia is relatively higher, I assume customers here would expect more. In order to satisfy such high expectations, I believe we need to provide an excellent standard of customer service."

Ueno expressed the importance of making Honda a successful car brand in Malaysia as part of the Japanese automobile manufacturer's strategy to create a strong hold for the brand in Asia. "When I joined Asia-Oceania Division in 1990, it was already widely believed that Asia would be a market with biggest potential. Indeed, from the 90's through to 2000's, Asia's growth and demand of cars grew tremendously. In this fast-growing region, I believe Malaysia plays a core role contributing to Honda's regional growth, due to its advantages of geographic location, human resources and fundamentals for advanced industries. Honda's success in Malaysia will continue to be essential to establish a strong Honda brand in Asia."

Speaking specifically on how he will be able to contribute to the Malaysian operation, Ueno set himself the challenge of maintaining Honda Malaysia's growth momentum. "In Malaysia, Honda has not only established a strong brand image, it has also grown significantly in sales volume by approximately 18,000 units or +2.1% market share in the last three years. By working together with Honda Malaysia's associates and dealers, I hope to upkeep the pace of growth and bring Honda Malaysia's business to its next level," he said.

Ueno started running in US three years ago and have since participated in four marathon races. Through this experience, he has encountered the famous words of Mizuki Noguchi, who is Japan's best and the world's third record holder for women's marathon. "Her line 'The distance you have run never fail to reward you' has become my personal mantra. It means the effort you have made will never be in vain, and that you cannot accomplish anything without continuous efforts," said Ueno.

Similarly for business, there is no success through chance or luck -- continuous effort is the key to accomplishment, which is the ultimate source of joy and challenge.