In its continual effort to achieve No. 1 Customer Satisfaction, Honda once again treated 309 customers and their partners to a dedicated preview night in conjunction with the launch of the All-New City. The attending Honda owners were accorded the opportunity to get up close with Honda Malaysia's final product introduction of the year, the 3rd Generation City in Mandarin Oriental Hotel, following a media launch in the morning.

Stephanie Chai, the renowned TV host and emcee lifted the night's curtain with a warm welcome to the attending Honda owners, and took the guest through the entire program thereafter.

The guests were completely taken in by the advance and stylish outlook of the All-New City as soon as the car was unveiled.

After the modest unveiling ceremony, Mr. Atsushi Fujimoto took over the podium and expressed his gratitude towards the attending Honda owners and guests who had accorded their precious time for the special preview night. He reckoned that Honda owners will be pleased with the All-New City that is now served complete with Style, Performance and Practicality, a complete package that aims to fulfil their desire for a stylish yet practical lifestyle.

In the end of his address, he attributed Honda's successful branding to its existing owners' continual support and encouragement. Speaking on behalf of the management, Mr. Fujimoto reassured Honda owners that the company is constantly striving to upkeep its No. 1 Customer Satisfaction principle and that the preview was organized specially for them. He also remarked that such a special preview night will only help to tighten the bond between the company and its customers.

Following the heartfelt appreciation note, the special preview of the All-New City ended with a sumptuous dinner that further sparkled by Leonard Tan, a local entertainer known as the maestro of thousand voices.

Judging by the feedback below, it could well be a love at first sight for many of the customers. Completely smitten by the sporty and advanced and stylish outlook of the All-New City, a few guests were sharing their soft spot for the All-New City. 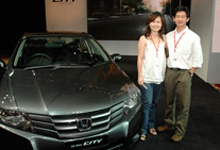 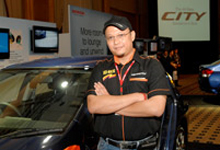 "It looks good! It certainly looks a lot better than the previous model in terms of outlook, both interior and exterior. The event is very high-end and classy, very comfortable. And of course the food is good."

"The All-New City is very sleek and different in design; it is not the traditional look. City has always known to be very practical and just nice for city driving. I'm impressed by the event. In fact, this is my first time attending a Honda event and I find it very glamorous, even comparative to other European car launches."

"If given a choice, I would choose the All-New City as it looks continental. I particularly like the Deep Lapis Blue as it's very different. This is my first time attending the Honda event and I like it."

"It's a complete facelift as compared to the previous model. The body shape is now more aerodynamic. There are also more practical features incorporated such as the arm rest in the back seat. I particularly like the Polished Metal Metallic. I enjoyed the ambience and the generosity of the host, good time management as they started on time." 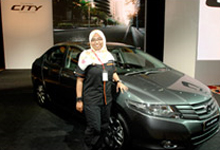 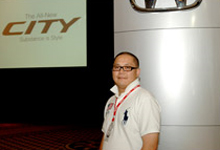 "Its exterior looks futuristic. I am also attracted to the changed interior, particularly the enhanced audio system as I really appreciate great in-car entertainment. At times like this, people would generally be attracted to a car that is fuel economy, affordable as well as stylish, and City is one of it. It is truly exciting to see the difference of the All-New City up close in an exclusive preview like this."

"I believe that Honda City is made for everyone. The body now is lower and it would give a more comfortable driving experience. I like the Deep Lapis Blue, the Crystal Black Pearl looks good too. The event is cool. I enjoyed the nice show and entertainment."